Do you remember that endless summer back in '84? Cruising down the ocean-highway with the top down, the wind in our hair and heads buzzing with neon dreams?

No, I don't remember it either, but with this experimental theme we can go there. 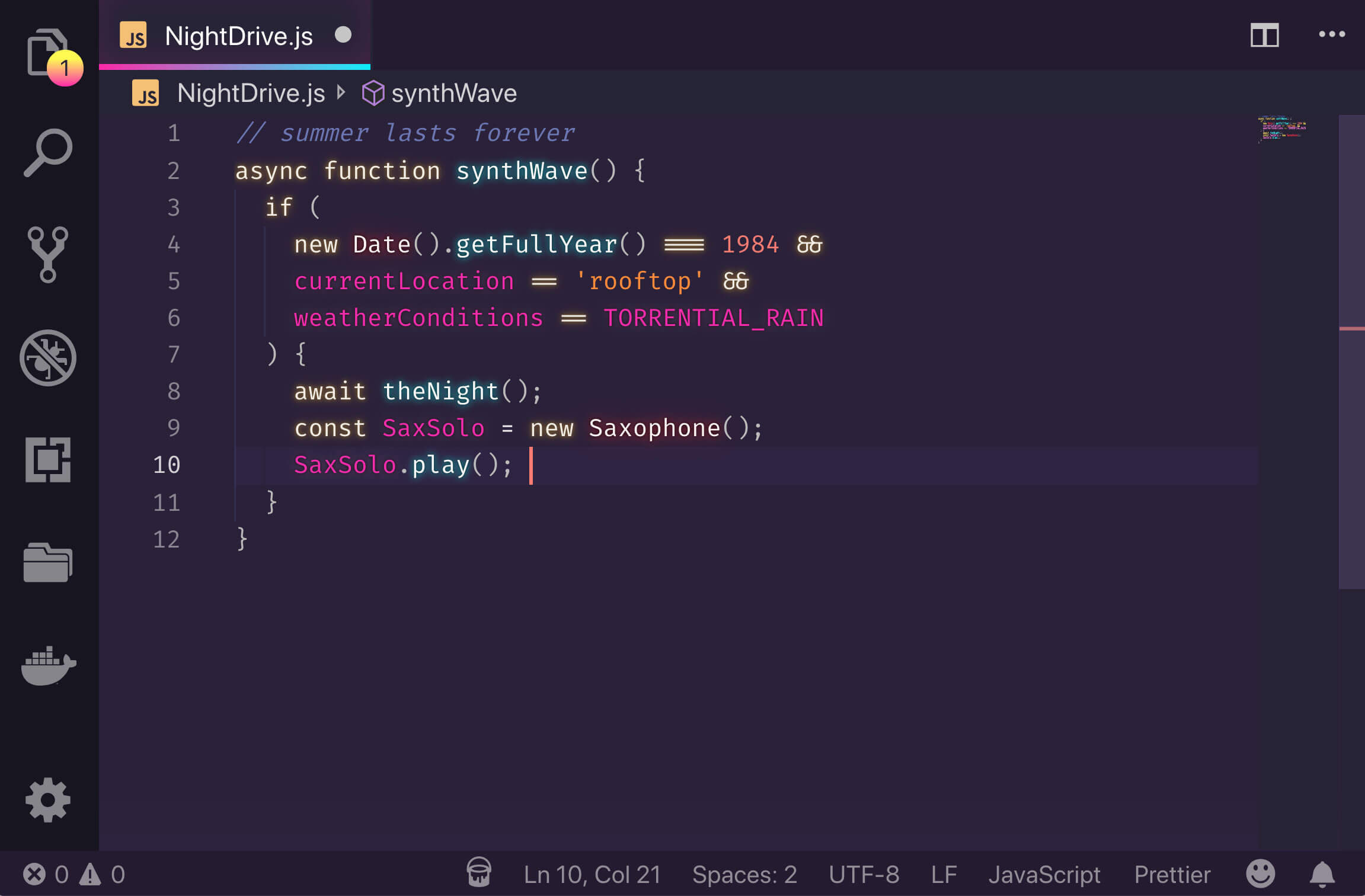 This colour scheme is influenced by the music and the cover artwork of modern Synthwave bands like FM-84, Timecop 1983 and The Midnight. By association, that means I've also taken heavy influence from the excellent retro-tinged artwork of James White (check out his work, it's awesome).

I was a kid in the 80s but for most of my teenage life I strongly disliked nearly everything about the 80s aesthetic of my childhood. It was like, so lame. With the hindsight of recent years though, I've realised that it was actually pretty sweet and I wanted to celebrate it a little.

Much the same way, in the modern web-development world of shaders, React and WebGL, I feel like it's easy to forget that the basics are actually pretty damn good. To that end, this theme goes back to basics - No Shader magic. No cloud-streamed WebGL render-farms. Just plain CSS.

The theme can be downloaded from the Visual Studio marketplace or from VS code itself, by searching for SynthWave 84 in the extensions tab. If you want to enable the glow, please carefully read the installation instructions for this, and the theme's dependencies.

Looking into the future. permalink

So, what's in store for the future of this theme? First and foremost, better language support. I primarily develop with JavaScript, Elixir and Python so whilst the theme looks good for those languages, tweaks have been needed for other languages. There's more to come.

Many people have been also excited to see Synthwave '84 ported to other software. Whilst I'm not currently planning to port the theme myself, the community has already produced several fantastic ports:

Perhaps most surprisingly for me, Panic, the team behind the legendary Mac editor Coda have recently announced their next-generation editor, called Nova. Turns out that the team at Panic liked Synthwave '84 enough to create their own version, called Outrun. It's looking pretty sweet.

Lastly, beyond editor support, the most popular feature-request has been for a light version. To that I can say: It's in the works. Which reminds me, the eagle-eyed amongst you might have noticed that this page is sporting a lovely shade of sunset-peach...